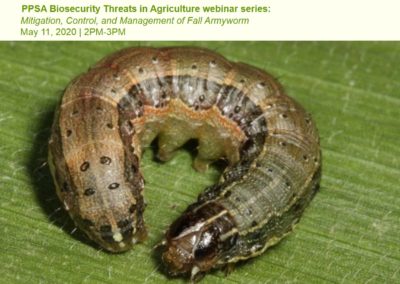 As the COVID-19 pandemic has minimized the mobility of people, the spread of fall armyworm (FAW) and other biosecurity threats cannot be disregarded. Hence, agencies and stakeholders like the Philippines Partnership for Sustainable Agriculture (PPSA), National Crop Protection Center (NCPC), and East-West Seed (EWS) have been continuously working to manage these challenges.

The PPSA conducted a webinar on the mitigation, control, and management of FAW last May 11. The resource speakers: Scientist Mario Navasero of NCPC, UP Los Banos and Teodoro Fortu of EWS focused the discussion on practical recommendations for handling FAW at the farm-level.

FAW is a threat to food security as it can infest various crops such as corn, rice, and sugarcane. The Regional Crop Protection Center II was the first to document its presence in the country on June 7 of 2019 in Piat, Cagayan. The presence of FAW in the Philippines was verified by NCPC in collaboration with the Institute of Weed Science, Entomology, and Plant Pathology through DNA analysis.

NCPC has developed a simple guide on how to differentiate the larva of FAW from the larvae of other noctuids attacking corn such as African armyworm, beet armyworm, tobacco cutworm, lawn armyworm, oriental armyworm, corn earworm, and green semi-looper. NCPC has also evaluated in the laboratory several biological control agents against FAW.

Fortu presented the corn learning centers of EWS, which serve as a venue for training farmers on cultural and integrated pest management (IPM). Currently, they have established 13 corn learning centers nationwide. They have been continuously conducting a nationwide IPM and FAW awareness campaign using materials translated into four different dialects. EWS is following the NCPC IPM recommendations for FAW.

This webinar attended by more than 80 participants was part two of the webinar series in FAW organized by the PPSA. The webinar series is entitled ‘Biosecurity Threats in Agriculture Webinar Series,’ which is supported by the International Development Research Centre under the Grow Asia Learning Alliance program. The series intends to discuss three of the existing biosecurity threats that affect the smallholder growers in the country. The first in the series was held on May 4, wherein the ASEAN Action Plan on Fall Armyworm Control was presented. The third and fourth webinars will be held on May 28 and June 4 to discuss the other two biosecurity threats, namely African Swine Fever and Avian Flu, respectively.