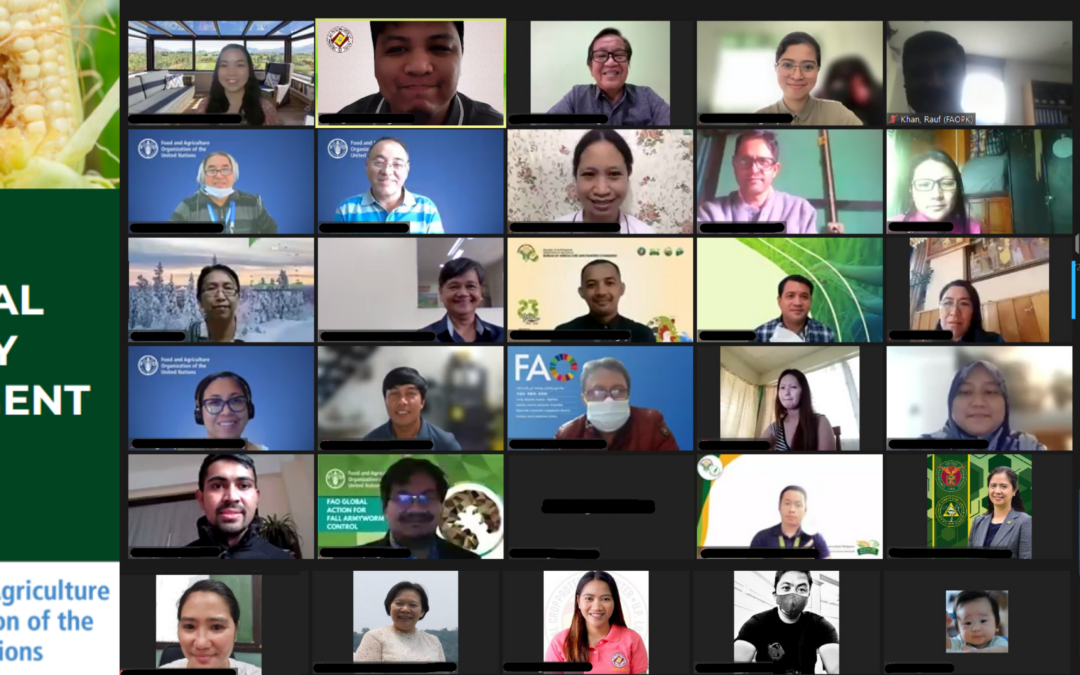 Participants during the photo opportunity for the 1st and 2nd episodes of the webinar training series on the development of the regional IPM package of technology for the sustainable management of the fall armyworm (Photos by Gideon Aries S. Burgonio and Romalene A. Limpiada)

The National Crop Protection Center (NCPC), in collaboration with the Department of Agriculture – Bureau of Plant Industry (DA-BPI) and the Food and Agriculture Organization of the United Nations (FAO) recently hosted the Southeast Asian (SEA) training series on the Development of Regional Integrated Pest Management (IPM) package of Technology for fall army worm (FAW).

Crop protection experts from Southeast Asian (SEA) countries came together for the first two sessions of the seven-part series last January 25 and 27. The training series will run until February of this year.

In his opening remarks, Mr. Melvin D. Ebuenga, NCPC director and TWG chair of the Global Action for FAW Control Program in the Philippines, emphasized the global impact of FAW. Meanwhile, Dr. Jonar I. Yago, assistant director for Operations and Technical and Production Services of DA-BPI, underscored the importance of the webinar series for the SEA countries to come up with a unified control strategy against FAW.

The first session of the series focused on the prevention and avoidance of FAW. Dr. Sheryl A. Yap, director of the Institute of Weed Science, Entomology and Plant Pathology (IWEP), talked about agro-ecological options like cover crops, crop rotation, intercropping, among others; while Mr. Gerald E. Cammagay, senior science research specialist at the Organic Agriculture Division of the DA-Bureau of Agriculture and Fisheries Standards, discussed good agricultural practices for corn.

In his closing remarks, Dr. Yubak GC, senior agricultural officer of the FAO Regional Office for Asia and the Pacific, stressed the timeliness of conducting the series. He also expressed the need to think about the environmental impact of chemical pesticides as the second-generation problem caused by FAW.

Mr. Buyung Hadi, agricultural officer of the Plant Production and Protection Division of FAO Headquarters, concluded the program by bringing attention back to the people for whom the series is being done. “It is easy to get wrapped up in the technicalities of the work…but by (sic) the end of the day, we do all these so we can help farmers manage such pests,” he said.

(This article was first published in the AGGIE Green & Gold newsletter.)