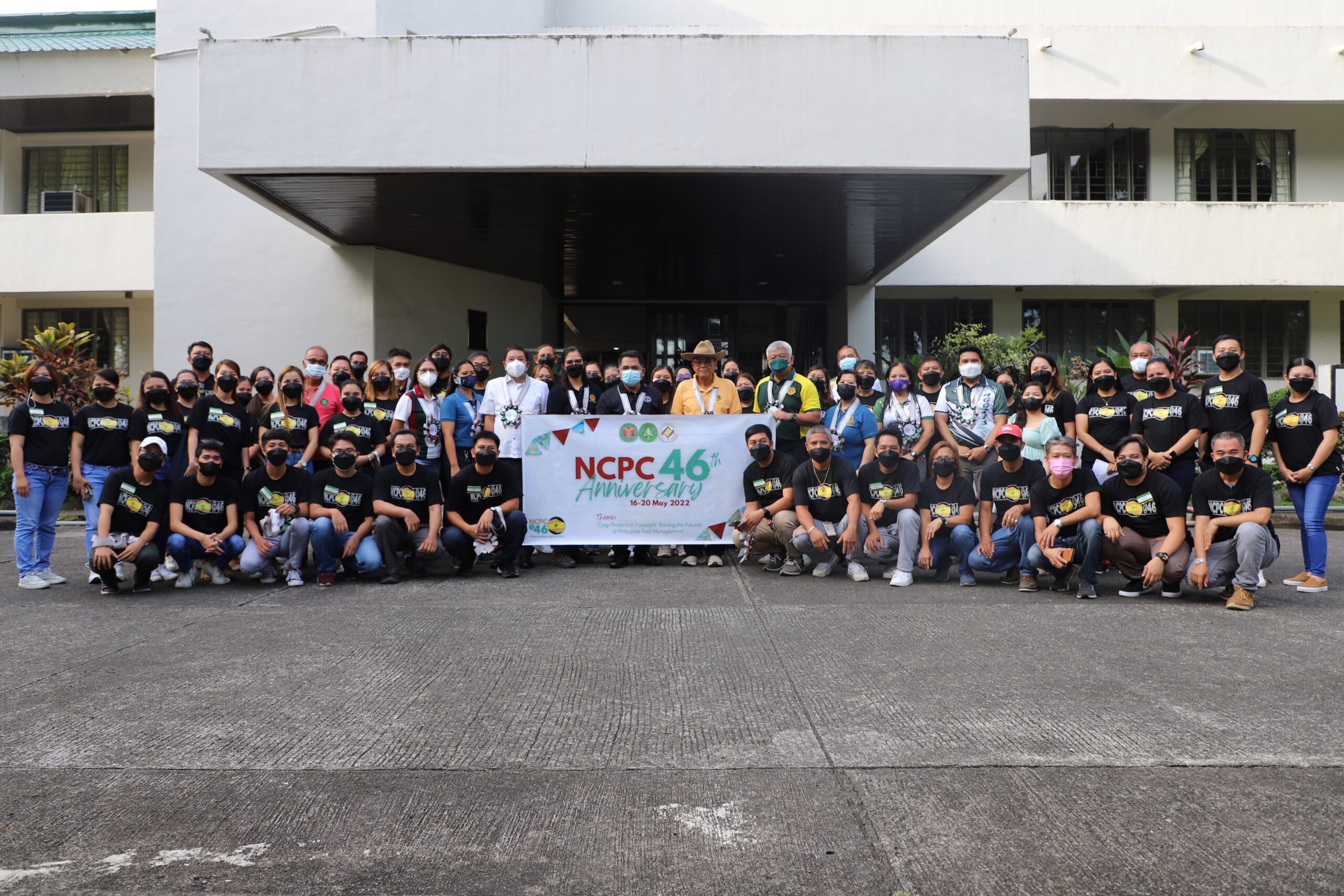 The NCPC anniversary week began with a webinar series on the futures of crop pest
management.

The first episode which was about Foresight for Crop Pest Management in Research was held
on May 16, with Dr. Rhodora Romero-Aldemita, Executive Director of the International Service
for the Acquisition of Agri-biotech Applications (ISAAA), Inc., as resource speaker.

Dr. Aldemita shared that the effects of climate change on food production, the prevalence of
food insecurity, and hunger cannot be solved by business-as-usual attitude.

She proceeded to talk about the need for biotechnology crops which has potential in fighting
diseases, increasing yield, and producing safer crops. According to her, for the past 25 years,
biotechnology has provided herbicide, insecticide, and disease resistance traits among crops.
She also shared the status of biotechnology in the Philippines as well as the upcoming biotech
products in the country such as golden rice, BT eggplant, and BT cotton.

The second episode of the webinar series, which was held on May 17, featured Dr. Rex L.
Navarro, Senior Technical Adviser of the Department of Agriculture-Bureau of Agricultural
Research, who discussed Foresight for Crop Pest Management in Extension and Policy Making.
Dr. Navarro discussed the present landscape of agriculture and the current agri-fishery research
for development and extension (R4DE) systems.

He shared that there are already policy directives for One Research for Development and
Extension Agenda and Program and for the Province-led Agriculture and Fisheries Extension
Systems (PAFES) which seek to rectify the fragmented R4DE systems in place.

During his presentation, Dr. Navarro also underscored the importance of scaling pest
management innovations. According to him, aside from scaling up (transforming institutional
conditions), scaling out (reaching more users) and scaling deep (changing minds, values, and
practices) are also crucial. He suggested the use of novel ways to “reach the unreached” such
as digital IEC dissemination.

On May 18, NCPC held a testimonial and recognition program at the NCPC Auditorium to
recognize the loyalty and outstanding performance of its personnel and acknowledge the
contributions of former staff.

The following personnel and teams received awards for the outstanding performance of their
work:

The Center’s new personnel were also welcomed, while newly promoted staff were
acknowledged.

A testimonial was held at the latter part of the program to recognize the retirees from 2021 to
2022, namely: Dr. Gorgonio M. Quimio, Ms. Virginia V. de Mesa, and Mr. Melvin D. Ebuenga.

Colleagues and family members shared stories and expressed their appreciation for the
retirees. Mr. Ebuenga was also given a tribute for his contributions as former director of the
Center.

The highlight of NCPC’s week-long anniversary was the tree planting activity and kapihan with
past and present UPLB administrators, alumni, and partners held on May 19.

A kapihan/kamustahan and a short program followed at the NCPC Auditorium where messages
and greetings were delivered by past and present UPLB administrators and guests. Among
them was Dr. William D. Dar, Secretary of the Department of Agriculture, who, in his recorded
message, remarked that NCPC fulfilled its function in RDE as part of UPLB’s goal of promoting
food security through effective pest management. He expressed his hope that NCPC will
continue to address crop pest problems, particularly against transboundary pests and diseases
amidst climate change.

Battle of the Bands

The anniversary celebration of NCPC ended with a Battle of the Bands competition among the
Center’s personnel. The activity was held on May 20 at the NCPC Auditorium.

The four competing teams were: Four of Ace, Hiraya Band, Mycolove, and Dark Horse Band.
Each team performed one song is the English language and another in the Filipino language.

The Four of Ace, composed of Mr. Rowell P. Mayores, Mr. Freddiewebb B. Signabon, Mr. John
Ivan Pasquil, and Mr. Norman Dela Cruz, emerged as the winner of the competition.

The Battle of the Bands competition is part of the NCPC’s Got Talent program which seeks to
provide an avenue for NCPC personnel to showcase their talents.