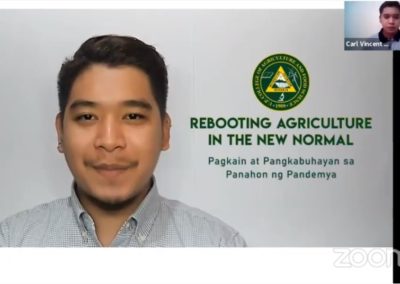 SPIDTECH was released on Google Play Store in March 2019. As of July 2020, the application has been downloaded in more than 4,500 unique devices.

Angelo C. Guiam, a computer programmer from NCPC and primary app developer of SPIDTECH, was invited a resource person during the second session of SARAI Eskwela on August 5 via Zoom and Facebook Live. The SARAI Eskwela, is a webinar series on smarter technologies, practices, and innovations for agriculture organized by the Project Smarter Approaches to Reinvigorate Agriculture as an Industry (SARAI). It runs every Wednesday afternoon from August to September, and is supported by the DOST Office of the Undersecretary for Regional Operations, DOST Regional Offices, UPLB Information Technology Center, and SUC partners of the Project SARAI.

SPIDTECH was also featured during the fifth session of the CAFS Webfresher Course last August 19, which was hosted by the NCPC. Carl Vincent D. Gapasin, a plant pathologist and research associate of the project, served as the resource person, while Sarah Jane B. Manaday, a plant pathologist, and Gideon Aries S. Burgonio, an entomologist, served as the moderators of the program. The Q&A portion was also assisted by some experts from the project. More than 300 participants joined the session via Zoom, YouTube, and Facebook.

In both seminar sessions, the resource persons added games to their presentations, making the webinars more interactive. There were short quizzes and raffle for participants who downloaded the SPIDTECH application during the webinars.